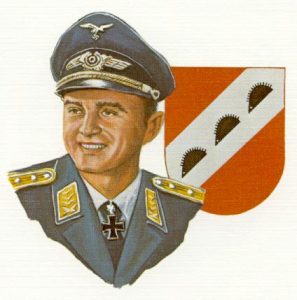 As an ace in both piston-powered aircraft and jets, Wolfgang Späte is a member of a unique group within the fraternity of fighter pilots. He also flew the first combat mission ever in a rocket-powered fighter–which placed him among those who opened the door to the space age. Born in Dresden, Germany, in 1911, he began his flying career in 1927 in gliders and competed in glider meets at the famous Wasserkuppe Flying School. He built his own glider and went on to win many international gliding competitions, including the 19th Rhoen Gliding Championships.

He began his career as a test pilot in 1937 working at the German Gliding Institute. Drafted into the Reserves in 1939, he flew reconnaissance aircraft during the invasions of Poland and France. By late August 1940, he had transitioned to fighters and was assigned to fly the Me-109. In April 1941, he flew fighter escort in the invasion of Yugoslavia and by the summer of 1941 had participated in the invasion of Russia. Stationed on the northern front near Leningrad, he often flew five fighter-sweep sorties a day. In the next 10 months, Späte scored 72 victories and was awarded the Knights Cross with Oak Leaves by Hitler, personally. Captain Späte departed the Russian front in April 1942 to become the Luftwaffe liaison on the top secret Me-163 Komet rocket-fighter program.

Preparing for its introduction into the war, Späte, a brilliant and future-oriented strategist, set in action a plan to train pilots in this unique weapon. His dedication, in the face of skepticism from senior Luftwaffe officers, resulted in a nucleus of 30 pilots being trained to fly the world’s first rocket fighter. Major Späte returned to Russia in May 1944 as Group Commander of IV/JG54 flying the Fw-190. In December 1944, he returned to Germany to command the first operational wing of Komet fighters–JG400. As the war neared its end, he was assigned to JG7, an Me-262 jet combat wing, where he scored five victories.

By the end of the war, he had scored a total of 99 aerial victories and flown more than 600 combat sorties. He rejoined the newly organized Luftwaffe in 1956 and served in many duties until his retirement as a lieutenant colonel in 1967. Späte is an active author and his works include Pilots Today and Tomorrow, The Top Secret Bird: Me-163, and Everything That Begins With F.

Flying behind German lines over Rumania in July 1944, Major Späte spotted 20 Russian bombers and their fighter escorts. Pressing the attack, Späte downed one bomber and set another on fire before his plane's fuel line was hit. With his cockpit filled with flames and his clothes on fire, he bailed out just as his plane exploded. Suffering from third-degree burns, he came under fire from Russian infantry but managed to crawl toward his own lines. Badly burned, he was not recognized by German soldiers until he produced his identification. Hospitalized for only 2 weeks, the spirited group commander visited Luftwaffe Headquarters and used his "horrible looks" to gain sympathy and obtain extra rations for his men.