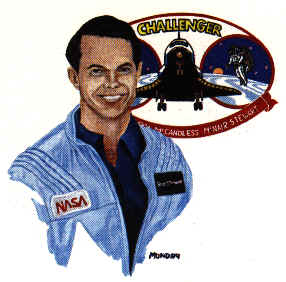 Flying untethered in space with the aid of a Manned Maneuvering Unit, Robert L. Stewart embodies the spirit of a true aerospace pioneer. Born in Washington, D.C., he graduated from the University of Southern Mississippi in 1964 and was commissioned into the US Army through the Reserve Officer Training Corps program. Stewart attended the Army Air Defense School at Fort Bliss, Texas and was assigned as an Air Defense Artillery Director at the 32nd NORAD Region Headquarters (SAGE), Gunter Air Force Base, Alabama. In 1966, he completed Army helicopter training and became an Army aviator.

Assigned as a fire team leader, he transferred to Vietnam in July 1966 and accumulated 1,035 hours of combat time with the armed helicopter platoon of Company A, 101st Aviation Battalion, later designated the 336th Assault Helicopter Company. After returning stateside, Stewart served as an instructor pilot at the US Army Primary Helicopter School, Fort Wolters, Texas. He then attended the University of Texas, earning a Master of Science degree in Aerospace Engineering in 1972. Following graduate school, Stewart was assigned overseas again, this time to Seoul, Korea, in operations positions with the 309th Aviation Battalion. In July 1973, he entered the Navy Test Pilot School’s rotary wing test pilot course at Patuxent River, Maryland.

Upon graduation, he moved to Edwards Air Force Base, California, to serve with the US Army Aviation Engineering Flight Activity. He conducted engineering flight tests on a wide variety of helicopters and fixed-wing aircraft, including prototype development work on the AH-64 Apache and the UH-60 Blackhawk helicopters. In August 1979, Stewart became a National Aeronautics and Space Administration (NASA) astronaut, and in February 1984 traveled into space aboard the shuttle Challenger on STS-41B. On 7 February, flying untethered outside Challenger, he became the second astronaut to pilot the Manned Maneuvering Unit in space.

He returned to space on STS-51J in October 1985, the maiden flight of the shuttle Atlantis, which was a classified mission for the Department of Defense. Stewart has spent 289 hours in space, flown 38 types of aircraft, and logged 6,000 hours of flight time. After leaving NASA in January 1987, he was assigned to Redstone Arsenal, Alabama, to work with the Army Strategic Defense Command, where he became Deputy Commander in July 1987. Brigadier General Stewart is currently the Director of Plans for the US Space Command; and Commander, US Army Element, North American Aerospace Defense Command and US Space Command, at Peterson Air Force Base, Colorado.

On 7 February 1984, Army Lieutenant Colonel Bob Stewart rose from the cargo bay of the Challenger and became a human satellite, flying untethered at a speed in excess of 17,000 mph. Stewart manipulated the NASA/Martin Marietta Manned Maneuvering Unit during STS-41B to develop techniques and procedures for satellite retrieval, repair and refueling operations. His work helped open a new era in manned orbital flight, laying the groundwork for human interaction in a broad spectrum of space activities.