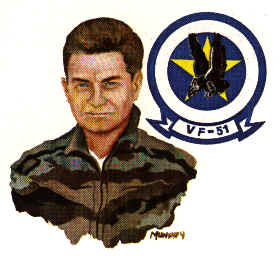 In recognition of an act of heroism he performed in 1969 as a prisoner of war (POW) in North Vietnam, James B. Stockdale was awarded the Congressional Medal of Honor. Born in Abingdon, Illinois, he graduated from the United States Naval Academy in 1946. From 1946 through 1950, he served on a variety of ships, including a destroyer and a submarine chaser. Earning his wings in 1950, Stockdale began his flying career in carrier-based antisubmarine aircraft. After a tour as a Landing Signal Officer, he was selected to attend the Navy’s Test Pilot School in 1954. In 1957, he returned to fleet duty as an operations officer and then as an executive officer.

In 1960, he became the first aviator to log 1,000 hours in the F-8 Crusader. After 2 years of postgraduate school at Stanford, Stockdale was given command of VF-51, flying the F-8E, and was sent to the Gulf of Tonkin, in Southeast Asia. On 2 August 1964, while on a training mission, he was directed to support the USS Maddox. Arriving on the scene, he found the Maddox under attack by three North Vietnamese PT boats. Stockdale and his wingmen attacked the PT boats, sinking one and damaging two. Two days later, he was again tasked to support the Maddox in an event known as the Gulf of Tonkin Incident. He remained in the operational area known as Yankee Station until November 1964, when he relinquished command of VF-51.

Five months later, he sailed as the Air Group Commander of the USS Oriskany, on a full combat cruise bound again for Yankee Station to begin support of Operation Rolling Thunder. On 9 September 1965, while flying an A-4 Skyhawk, Stockdale, at the age of 41, was shot down over North Vietnam and became a prisoner of war. For the next 7 1/2 years, he served as the senior naval service POW in the central penitentiary and an outlying maximum-security prison in Hanoi. Despite nearly constant torture and 4 years in solitary confinement, Stockdale instituted both discipline and a chain of command among the POWs. Meanwhile, his wife, Sybil, organized the POW/MIA wives and families back home into the National League of Families of American Prisoners and Missing in Southeast Asia, an organization dedicated to raising American consciousness of North Vietnam’s maiming and killing of Americans in the Hanoi prisons. On 12 February 1973, Captain Stockdale was released.

After retiring from the Navy as a vice admiral and President of the Naval War College, he became President of the Citadel at Charleston, South Carolina. Today, Admiral Stockdale is a senior research fellow at the Hoover Institute of Stanford University.

On 5 August 1964, Commander James B. Stockdale, while serving as Commander of VF-51, led a strike force from the USS Ticonderoga against the Vinh oil storage yards in North Vietnam. President Johnson ordered the attack in retaliation for the North Vietnamese attack against the USS Maddox in the Gulf of Tonkin. Flying in his F-8E Crusader, Stockdale and his force totally destroyed the oil yards and began the United States' direct involvement in the war in Vietnam.