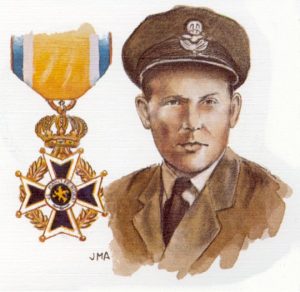 Squadron Leader Bram van der Stok is Holland’s top ace and one of World War II’s unsung heroes. Born in 1915 in Indonesia, he entered the Dutch Air Force in 1936. After leaving the service in 1939 to attend medical school, he was recalled in less than a year and joined No. 1 Fighter Squadron and flew the Fokker D-XXI. When Germany invaded Holland in May 1940, the Dutch were no match for the blitzkrieg and within 5 days the country capitulated. Van der Stok was able to escape to England the following year and joined No. 41 Spitfire Squadron, soon becoming an ace with six victories.

Fate again intervened in July 1942 when he was shot down over France and parachuted into the midst of a German patrol. Following his capture, van der Stok was taken to the famous ” escape-proof” prisoner-of-war camp in Germany–Stalag Luft III. Not willing to sit out the war, he made three unsuccessful escape attempts. These attempts included burrowing under the camp’s wire fence, impersonating a Russian worker, and walking out the camp gate dressed as a German guard. Finally, in March 1944 he was one of 76 officers to make their way out of the prison camp via a tunnel dug as part of the master plan called “Big X.” Over the next 6 weeks, he traveled west and south through Germany, Holland, Belgium, France, and Spain before arriving in Gibraltar. He was one of only three of the original escapees to eventually reach freedom.

This escape is one of the legendary stories of World War II and was the basis for the classic book and movie, The Great Escape. Back in England, van der Stok rejoined the RAF and finished the war as commander of the No. 322 “Dutch” Squadron. For his heroic efforts throughout World War II, Bram van der Stok received the Order of the Orange Nassau and is recognized as Holland’s most decorated aviator. Following the war, he achieved his goal of becoming a doctor and has received numerous awards for his work with the Coast Guard auxiliary, with which he has made over 100 rescues at sea.

On 10 May 1940, Germany attacked Holland, Belgium, and France simultaneously. By the l3th of May, only 10 of the 248 Dutch aircraft which went into action survived, and by the evening of that day these 10 had been destroyed in an attack on advancing German formations. During the morning of the first day of the battle, Bram van der Stok was flying a Fokker D-XXI on patrol near his airfield in Holland. As dawn broke over the horizon, ground control alerted the patrol that the airfield was under attack by German Fighters. Although outclassed by the superior enemy aircraft, van der Stok shot down two Me-109s, the first of which was the initial Dutch aerial victory in the 5-day Battle of Flanders.