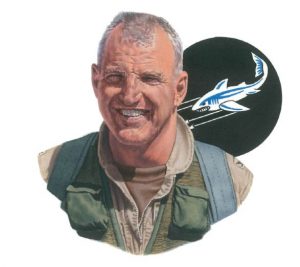 Raymond “Donk” Strasburger led a 2-ship of A-10 Thunderbolt IIs – better known as “Warthogs” – during the Battle for Baghdad in Operation IRAQI FREEDOM. He and his wingman destroyed major elements of an enemy armored force assaulting Task Force 2-69 Armor at Muthanna Bridge, saving American lives and allowing them to continue maneuvers to encircle Baghdad. Born in Washington D.C., Strasburger dreamed about serving in the military after listening to his father describe his experiences as a Marine during WWII. In pursuit of that dream, Strasburger attended the Catholic University of America and completed Air Force ROTC at Howard University. During ROTC he earned a pilot training slot, but was disqualified when he failed a physical for what was thought to be a cutting-edge vision test. Determined to fly, he accepted a navigator slot. During his in-processing physical he discovered the eye test he failed was discontinued because it was inaccurate! Undeterred, Strasburger earned his navigator wings and although he loved the B-52 mission, he longed to be a pilot and fly fighters like his brother Frank. Over the next three years he repeatedly applied for pilot training and was finally accepted. Strasburger earned his pilot wings, qualified in the Warthog, and served in various positions during multiple fighter assignments. Eventually, he was assigned to the 75th FS at Pope AFB, North Carolina. As the Tiger Sharks’ Director of Operations, Strasburger deployed to OIF and flew 36 close air support combat missions. Following a combat change-of-command at Tallil Air Base, Iraq, Strasburger became the 75th FS Commander and coined the phrase “Tiger Shark Standard… ATTACK!” which embodied the spirit of tenacity, dedication, and excellence required by close air support warriors, and reflected the indomitable spirit of the A-10 community. Following a tour as the Joint Staff Chief of Detainee Affairs, he served a one-year tour as the 455th Air Expeditionary Operations Group Commander at Bagram Air Base, Afghanistan during Operation ENDURING FREEDOM. While there, he was known for his universal dedication both in the air and on the ground. His “Commander’s Intent” was unmistakable in his credo: “Find ways to say ‘YES’…an 18-year old warrior’s life may depend on what you do today.” He currently serves as the United States Air Forces in Europe-Air Forces Africa Director of Staff. Strasburger lives in Germany with his wife, Teresa; they have two daughters, Rebecca and Brooke, and a son, Greg.