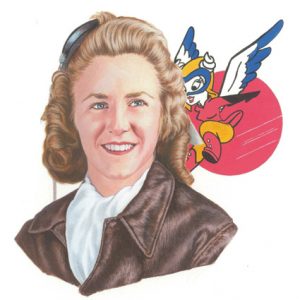 Mrs. Elizabeth Bridget “Betty Wall” Strohfus audaciously served her nation during WWII as a Women Airforce Service Pilot (W.A.S.P.). She served from 1943 until the W.A.S.P. were disbanded in December 1944. Piloting eight different aircraft including the B-17, B-26, P-39, and her favorite the AT-6, she flew anti-aircraft training missions against US Army ground and bomber forces, towed aerial targets, and even instructed male cadets in the skill of instrument flight. Her critical efforts not only prepared and trained soldiers and airmen for war, but also freed male pilots to remain in combat. Strohfus was born in Faribault, Minnesota on November 15, 1919, number five of six children. Shortly after high school graduation, a member of the local Sky Club first introduced her to flight. After an exhilarating flight in a Piper Cub, she was hooked. Strohfus volunteered at the Club, completing odd jobs for a chance to fly with the members. When one of the 15 members of the all-male Sky Club enlisted, she was asked to join. Borrowing $100 from the local bank, she paid the dues and began flight lessons. It was at the Club that she read a notice from the military asking for women pilots interested in assuming duties to free male pilots for overseas combat. Quickly obtaining the minimum 35 flight hours, she applied. At the minimum of 5’3″, with help of extra socks, Strohfus passed the physical and began her training at Avenger Field in Sweeetwater, Texas in 1943. As one of only 1,800 women accepted out of 25,000 applicants, out of whom 1,074 graduated, Strohfus received her wings in the first class of 1944, the ninth class overall. While most of the graduates went on to assignments ferrying aircraft, Strohfus volunteered to fly pursuit aircraft and was stationed at Las Vegas Army Airfield. There she towed targets behind a B-26 for fighter target practice and dove at bombers in pursuit aircraft and at infantry in the AT-6 for gunnery and anti-aircraft target practice. She was also qualified for missions in the P-39. Responding to a call for instrument instructors, she was accepted and sent back to Avenger Field for instruction. After receiving her instructor certification, she returned to Las Vegas to teach instrument flight to male cadets. The men, as always, were at first quite shocked to find out their instructor was a woman. Strohfus continued at Las Vegas until the W.A.S.P. were disbanded on December 20, 1944. After the war, she unsuccessfully applied to Northwest Airlines and worked for a time as an aircraft communicator. After several other jobs, she returned to Faribault where she married and raised a family. She placed all of her memorabilia in a box, retiring the memories to a closet. In 1972, after her first husband passed and her children left for college, she moved to Boston where she worked for the American Cancer Society until 1979. While there, Strohfus was central in lobbying congress for the recognition of W.A.S.P. as veterans. The law was passed and signed in 1977 that allowed the Secretary of Defense to declare in 1979 that service in the W.A.S.P. was active military service and those serving were veterans. Not ready to stop inspiring, since 1991, “Betty Wall” has traveled to 22 states, telling her story to thousands of people, primarily schoolchildren. She is a member of the Ninety Nines, Confederate Air Force and in 2001 was inducted into the Minnesota Aviation Hall of Fame. Elizabeth Strohfus currently lives in her hometown of Faribault Minnesota near her son, Patrick Roberts and sister, Cecelia Bell..

During World War II the US Army Air Force faced a dilemma. While America's military pilots were critically needed for combat missions in two theaters, aircraft were being produced by the thousands and needed to be delivered to military airfields nationwide. Jacqueline Cochran and General Hap Arnold launched an experimental program to train women to fly military aircraft in an effort to free male pilots for combat.