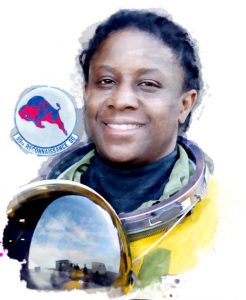 Colonel (ret) Merryl Tengesdal, served a distinguished Air Force career as a U-2 “Dragon Lady” high-altitude reconnaissance aircraft command pilot, with over 3,400 flight hours and 330 combat hours.  She was the first and only African American woman to fly the U-2.  Col Tengesdal began her aviation career flying the SH-60B Seahawk Helicopter in the United States Navy.  In 2004 she joined the Air Force’s U-2 program.  She is one of only five women and three African Americans to be accepted into the Air Force’s U-2 program.