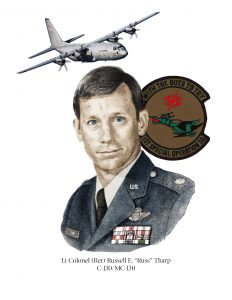 Lt Col Russell E. Tharp was born 8 February 1946, in the small town of Yale, Oklahoma. He went to Oklahoma State University. It wasn’t until he was in college that a friend asked if he would like to go flying. After this first flight in a Cessna 172, he decided that flying would be his goal if he ever got the chance. That chance came when a classmate came into the lounge where several of his friends were hanging out in 1968 and announced that an Air Force (AF) recruiter had just told him the AF was looking for lots of pilots. Russ was out the door in an instant, headed for the recruiter’s office to put in his application.  With only one semester to go to graduate and an acceptance letter for Officer Training School with follow-on to Undergraduate Pilot Training, Russ began a 21-year Air Force career. After being commissioned a 2nd Lt out of OTS in May 1969, Russ started pilot training at Craig AFB, AL.  After earning his wings, Tharp got his first choice as a C-130 pilot to Dyess AFB, TX assigned to the 773 TAS. Following almost three  years at Dyess AFB, Tharp got an assignment to Ching Chuan Kang AB, Taiwan in 21st TAS. After only three months, the base was closed and the 21 TAS relocated to Clark AB in the Philippines. One of his most notable flying operations here was the evacuation of Saigon in April 1975. Following this two year stint flying around Southeast Asia, Tharp was given a rated supplement assignment in the security service as a signals intelligence (SIGINT) Officer with six months training at Goodfellow AFB, TX and an 18-month tour to San Vito AS, Italy.  After 18 months at San Vito AS, Russ was assigned to the 8th SOS at Hurlburt Field, FL, in March 1978. It was while assigned to the 8th SOS that in November 1979 the American Embassy in Tehran, Iran was overrun by radical militants and most of the embassy staff were taken as hostages. The 8th SOS and the 1st SOW became prime players in planning and executing a mission to rescue over 50 hostages in Tehran.  Following over five months of extensive planning and training in which the rescuers had to learn to use night vision goggles, develop procedures to execute multi-ship, comm-out air refueling, and blacked-out landings, the mission, code-named Eagle Claw, was executed on the night of 24 April 1980 from Masirah AB, located on a small island off the coast of Oman.

Tharp’s next assignment in 1981, took him back to Clark AB to the 1st SOS and then to 13th AF, where he became a special ops liaison to PACAF and 23 AF. He then returned to Hurlburt Field in 1984 and was assigned to the newly formed Special Missions Operational Test and Evaluation Center. In the meantime, 23rd AF, which had been headquartered at Hurlburt Field, became the headquarters for the AF Special Operations Command (AFSOC). It was here that Tharp was directly involved with any new and/or evolving equipment or capabilities developed specifically for special operations. In this capacity, he had the opportunity to work directly with Mr. Robert Fulton Jr. in developing an improved Surface to Air Recovery System capability to retrieve up to six personnel at once or up to a 1500 lb. package vice the two-person or 500 lb. capability that had been in use since the early ‘60s. Tharp’s final assignment was as the Special Operations Liaison to Headquarters Tactical Air Command at Langley AFB where he worked with the U.S. Army Training and Doctrine Command (TRADOC) at Ft. Monroe and Ft. Eustis.  Lt Col Tharp retired from the Air Force in February, 1990.  Following his retirement, Tharp worked in the finance department at Busch Gardens near Williamsburg, VA and managed an office for Jackson Hewitt Tax Service in Newport News. In mid-1991 he was hired as one of the initial cadre to teach Air Force crews to fly the new MC-130H, Combat Talon II (CT-II) aircraft where he was directly involved in training every CT-II aircrew from 1992 to 2016 at Kirtland AFB in Albuquerque, NM. During this time from 2000 to 2015, Tharp flew part-time with a local company flying air freight under contract for UPS.  In Nov, 2016, the Air Force decided to move all CT-II training to Hurlburt Field. Just after retiring from the simulator instructor job, Russ flew King Air 90s for about a year with another local company before taking a position in 2017 flying C-12s and King Air 200s in Afghanistan under an Army contract conducting Intelligence, Surveillance, and Reconnaissance missions for a company in Virginia, from which he recently retired.  Lt Col Tharp continues to reside in Albuquerque, NM with his wife, Kay. He has three daughters living in Oklahoma and a step-daughter in North Carolina and step-son in Colorado.