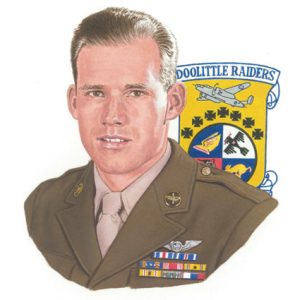 On 18 April 1942, David J. Thatcher and seventy-nine other Doolittle Raiders successfully accomplished the first air raid on Japan. Thatcher served as the engineer and gunner for crew number seven. His crew successfully struck the Nippon Steel Factory in Tokyo. Doolittle’s B-25s were forced to launch 250 miles earlier than planned because a Japanese fishing boat had spotted them. All sixteen aircraft had to ditch or crash land after striking their targets because they did not have enough fuel to make it to their intended Chinese landing sites. Staff Sergeant David J. Thatcher was born on 31 July 1921 in Bridger, Montana. After he completed high school, he entered the Army in December 1940. He attended Lincoln Airplane Mechanics School at Lincoln, Nebraska from July to December 1941. He went on to serve as a mechanic with the 95th Bomb Squadron. Wanting to fly, he volunteered for the secret mission later known at the Doolittle Raid. Thatcher was selected and assigned as an engineer/gunner to Crew 7, the “Ruptured Duck”. As the plane was flying over the coast prior to reaching Tokyo, they saw a formation of enemy planes. The Japanese formation never detected the “Ruptured Duck” due to their low-level flying. The mission was highly successful thanks to all the prior training the crews received at Eglin AFB on low-level bombing. With bad weather and lack of fuel, the pilot, Lieutenant T. W. Lawson, made a quick decision and attempted to crash-land the “Ruptured Duck” on a beach strip of the coastline of China. Instead, the aircraft hit the water a quarter mile off the shore. The crew got out of the aircraft and swam to shore. In the crash, all but Sergeant Thatcher were seriously injured. Sergeant Thatcher then took charge of the group and ensured the injured were given medical care two days after the crash once they reached Chinese mainland. With the help of the Chinese underground, he made sure the crew evaded Japanese capture. For his gallantry in action subsequent to the raid on Japan, he received the Silver Star. Crew 7 of the Doolittle Tokyo Raid is subject of the book and movie Thirty Seconds over Tokyo. Sergeant Thatcher went on to serve in England awaiting the invasion of North Africa. In Africa, he became a engineer/gunner on the B-26. His last assignment was to California where he was discharged from service on July 11, 1945. Thatcher’s decorations include the Silver Star, Distinguished Flying Cross, Air Medal with four Oak Leaf Clusters, and the Chinese Army, Navy, and Air Corps Medal, Class A, 1st Grade. He lives in Missoula, Montana with his wife, Dawn.

As the engineer and gunner for crew 7, 95th Squadron, 17th Group, Staff Sergeant David J. Thatcher along with 79 other airmen were part of the first raid on Japan known as the Doolittle Tokyo Raid on 18 April 1942. His brave actions ensuring the safety of his crew, earned him the Silver Star.