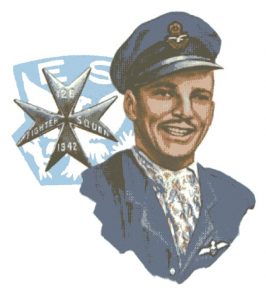 Reade Tilley is an American ace with seven victories, all of which were scored while flying with the Royal Air Force (RAF). Tilley was born in Clearwater, Florida, where he completed public education. He later attended both the University of St. Petersburg and the University of Texas. In 1939, he was faced with a difficult choice between becoming a professional race car driver or a fighter pilot. With Europe fighting for its life against the Nazis, he chose to become a fighter pilot. In June 1940, Tilley joined the Royal Canadian Air Force and, in 1941, was sent to 121 Squadron, one of the three American-manned “Eagle Squadrons” in the RAF, where he flew Hurricanes and Spitfires.

Tilley read of the ferocious battle for the besieged Mediterranean island of Malta and volunteered for the daring mission of reinforcing the island by flying land-based Spitfires from the deck of an American carrier. On the morning of 20 April 1942, he and 46 other pilots launched Spitfires from the deck of the Wasp and began the hazardous flight to Malta. All 47 planes arrived safely at Malta, and the next day, on his first mission from the island, Tilley downed an Me-109. The Germans and Italians reacted aggressively to destroy the Spitfires. Two days after their arrival, all 47 Spitfires were either destroyed or out of commission.

In June 1942, Tilley returned to Gibraltar and led another flight of Spitfires to Malta from the deck of the Eagle, a British carrier. This mission was even more daring–the Spitfires were assembled on the dock and loaded directly onto the carrier. The first flight of these aircraft began with a sea launch, followed by a 700-mile trip through Axis-dominated airspace. Tilley, in the course of the battle for Malta, scored a total of seven confirmed kills–four in 1 week in May 1942. After his fourth victory, the RAF awarded him the Distinguished Flying Cross.

The citation read in part: “On three occasions by making feint attacks after having expended all his ammunition he had successfully driven off enemy fighters attempting to machine gun our aircraft as they landed.” Tilley was one of the first two Americans to receive this award for the Malta campaign. Following the war, Tilley became deeply involved in the Air Force information field. He was Director of Information for Air Forces in Europe during the Berlin Airlift, became the architect for the Strategic Air Command’s public information program, and served as Director of Information for Pacific Air Forces during the Vietnam conflict. After retiring from the Air Force, he became a consultant.

During the long battle for the island of Malta, Tilley and a British pilot encountered a formation of 50 enemy fighters. If they went up, down, sideways, or turned back, they were lost. They elected to do the only thing that gave them a chance--they flew straight into the enemy formation and put the German fighters at a disadvantage. In a flash it was over--the Spitfires were clear and heading for their home base. Tilley's cannons had proven deadly accurate. Two of the German Messerschmitt fighters burst into flames and crashed into the sea.