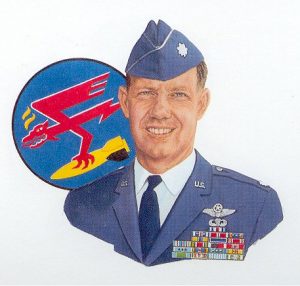 Robert F. Titus flew over 500 combat missions in two wars. Born in New Jersey in 1926, Titus attended high school and college in Virginia, and in 1945 joined the U.S. Army. As a paratrooper in the 82nd Airborne Division, he was a squad leader and attained the rank of Staff Sergeant. Commissioned in the U.S. Air Force in 1949, Titus earned his pilot wings and was off to Korea to fly the North American F-51 Mustang, and later, the North American F-86 Sabre. He completed 101 combat missions in the 39th Fighter Interceptor Squadron and then transferred to Dover AFB, Delaware. For more than a year, Titus ferried Republic F-84 Thunderjets and F-86s to Europe via the arctic route. In March 1954, he began test pilot school.

He spent six years in fighter test at Edwards AFB, California, flying the North American F-100 Super Sabre, the McDonnell F-101 Voodoo, the Convair F-102 Delta Dagger and F-106 Delta Dart, the Lockheed F-104 Starfighter, and the Republic F-105 Thunderstreak. He also took part in the zero-length-launch tests, in which an F-100 was rocketed from a truckbed by a 300,000-pound thrust booster attached to the fuselage. In 1959, Titus made an historic trans-polar flight from England to the United States in the single engine F-100. Following graduate school, he did a three year tour flying F-105s in Europe and then a staff tour at Langley AFB, Virginia, as Chief, Fighter Operations Branch. Next, he commanded the 10th Fighter Commando Squadron, the Skoshi Tigers, at Bien Hoa AB, Vietnam.

It was the only time the U.S. Air Force ever employed the Northrop F-5 Tiger in combat. After a voluntary extension, Titus transferred to Da Nang AB, Vietnam, to fly the McDonnell F-4 Phantom II. In January 1967, he became commander of the 389th Tactical Fighter Squadron. He flew 400 combat missions over Laos, North Vietnam, and South Vietnam, and destroyed three Mikoyan Gurevich MiG-21 Fishbeds in aerial combat. Returning stateside in the fall of 1967, he worked in research and development at Headquarters U.S. Air Force. He was project officer for the McDonnell-Douglas F-15 Eagle and Chief of Advanced Tactical Systems.

For Bob Titus, 22 May 1967 was a day to remember. While escorting F-105s to targets near Hanoi, his flight of F-4s engaged enemy MiG-21s. He quickly scored a missile kill as one adversary ducked into a cloud but came out the other side in flaming pieces. He found another MiG and chased him from 25,000 feet to near ground level. The enemy pilot maneuvered skillfully and negated a missile attack, but Titus used his cannon and shot the MiG down. He now had victories two and three but still faced a gauntlet of enemy surface-air firepower.