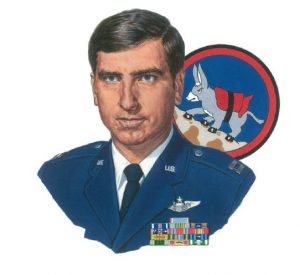 Bud Traynor answered President Ford’s call when he lead a crew of 24 in the evacuation of orphans from South Vietnam during Operation BABYLIFT’s first official mission.  On that fateful day in April 1975, an aircraft malfunction rendered Traynor’s C-5A Galaxy virtually uncontrollable.  His quick action and unorthodox piloting saved the lives of 176 people.  Bud was born in Athens, Georgia on 18 April 1944.  Coming from an early aviation family, his father was a “barnstormer,” he joined the United States Air Force in 1967 via Officer Training School.  Traynor graduated from pilot training at Laughlin AFB in 1969.  He was first assigned to fly the C-133A at Dover AFB.  About two years later, he deployed to Vietnam as a C-7A pilot.  Upon return, he transferred to the C-5A at Travis AFB.  A few years later on 3 April 1975, President Gerald Ford ordered Operation BABYLIFT with the goal of rescuing 2,000 Vietnamese orphans.  On the morning of 4 April 1975, Bud took his C-5 from Clark AB in the Philippines to Vietnam and arrived at Tan Son Nhut AB.  Once in Vietnam, the crew loaded 270 orphans, 53 civilians, and five medical personnel. Twelve minutes after take-off, the pressure door and ramp blew out resulting in a rapid decompression.  All control and trim cables to the tail were severed, leaving only one aileron and a wing spoiler operational.  The aircraft went into a steep dive.  Normal pilot reaction would have been to chop power but Traynor’s knowledge of aerodynamics told him better.  Instead, he added full power to arrest the dive and then used bank to prevent excessive climb.  When Traynor knew the aircraft would not make it back to Tan Son Nhut AB, he controlled a crash landing in a rice paddy near the runway.  The Accident Investigation Board attributed survival of the 176 lives to Captain Traynor’s unorthodox use of power and his decision to crash-land while the aircraft was still under some control.  Traynor was awarded the Air Force Cross for extraordinary valor during that short flight that began Operation BABYLIFT.  He continued to serve his country, graduating from Air Command and Staff College in 1980 and earning a Master’s Degree in Business Administration from Auburn University in the same year.  He was the Director of the Combat Employment Institute at Maxwell AFB and Vice Commander of Air Force Combat Operations Staff at the Pentagon.  Colonel Traynor served as Commander of Air Force Flight Standards Agency.  After 28½ years of outstanding service, Colonel Dennis “Bud” Traynor retired from the Air Force in 1995.  In 2007, Traynor was inducted into the Airlift/Tanker Association Hall of Fame.  Continuing his work in aviation heritage, Traynor, with his wife Pam, currently serve as Administrators for the Airlift/Tanker Association.

Capt Dennis "Bud" Traynor was the Aircraft Commander during the first BABYLIFT flight whose C-5A experienced a catastrophic malfunction.  Bud's quick action enabled a crash landing near Saigon.  His actions saved 176 lives. After the accident, he received the Air Force Cross for his extraordinary valor during the C-5's malfunction.