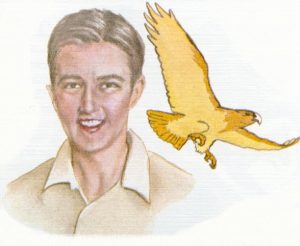 From the moment she saw her first airplane in flight, “Bobbi” Trout confessed to being “spellbound on becoming a pilot.” This desire to fly led her to become the fifth woman in the United States to receive a transport pilot’s license and a pioneer aviatrix of the 1920s and 1930s. She had her initial airplane ride at age 16 and vowed to earn enough money for lessons. “Bobbi” took her first flying lesson on 1 January 1928 and received her Federation Aeronautique Internationale license, signed by Orville Wright, later that spring. She soon went to work as a demonstration and test pilot for the Golden Eagle Aircraft Company flying a 60-hp Golden Eagle high-wing monoplane.

A year and a day after her initial lesson, she remained aloft over 12 hours in a Golden Eagle monoplane to set the women’s record for solo endurance. Five weeks later, she established five world records for women by staying airborne over 17 hours. She then set her sights on the women’s altitude record, breaking it in June 1929 with an altitude of 15,200 feet. From 18-26 August 1929, “Bobbi” flew a 100-hp Golden Eagle Chief in the first Womens Transcontinental Air Derby from Santa Monica, California, to Cleveland, Ohio. The participants encountered a public reaction that ranged from hostility to bemusement–Will Rogers called it the “Powder Puff Derby”–as well as weather and mechanical problems. A forced landing near Yuma, Arizona, took her out of the competition, but she flew on to Cleveland later and managed to arrive only a few hours after the others.

Three months later, “Bobbi” teamed with Elinor Smith in the first women’s in-flight refueling operation. Their Sunbeam biplane stayed aloft 42 hours and 5 minutes through refueling with a flexible hose from the support aircraft. The procedure involved “Bobbi” leaning out of the cockpit without a parachute to grab the refueling hose attached to a bag with provisions. Three successful hookups were accomplished before engine failure on the tanker aircraft forced an end to the flight. Trout set another refueling record in January 1931, this time with Edna May Cooper, when they stayed airborne over 5 days with 11 refuelings. She continued through the 1930s as an instructor pilot, an Aero Police Woman, and as a captain in the Women’s Air Reserve.

She also served in the Civil Air Patrol, and during World War II, ran a variety of successful industrial pursuits. In February 1984, she took the controls of a Curtiss Jenny to mark over 60 years since her first flight in that type aircraft. A charter member of the “Ninety-Nines,” a women pilots organization, “Bobbi” continues to pursue her interest in aviation history.

"Bobbi" Trout's record-setting flights in Golden Eagle aircraft, as well as her participation in the Air Derby, marked her as one of the leading women pilots of 1929. Her interest in flying led her to accept an invitation to join a group being formed to further opportunities for women in aviation. The organization called itself the "Ninety-Nines," based on a suggestion by Amelia Earhart that the title should represent the total number of charter members.