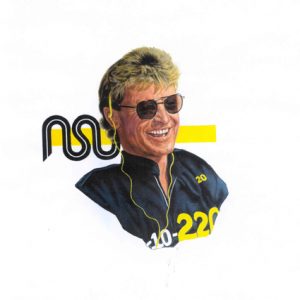 Sean D. Tucker was the first person ever to win the two most prestigious airshow industry honors in the same year, the Art Scholl Memorial Showmanship Award and the Bill Barber Award for Airshow Showmanship. Born in Riverside, California, in 1952, Tucker graduated from Cabrillo College in 1974 with an Associate’s Degree in Sociology. Ironically, even though he had his first flight lesson at age seventeen with his father as his instructor, Tucker was afraid of flying. To overcome his apprehension he took up skydiving, but a parachuting accident claimed the life of a close friend early on and merely validated his fears.

Determined to conquer them, he went ahead and got his pilot’s license, but it wasn’t until 1973, when he enrolled in an aerobatic training course at the Amelia Reid Flying School in San Jose, California, that he was finally able to feel at home in the sky. Tucker then set out to acquire as many ratings as he could, including his commercial, instrument, and helicopter ratings. In 1976 he bought his first Pitts aerobatic biplane, and shortly afterwards began performing in local California airshows. In 1979 he was forced to bail out of his plane during a practice session and nearly ended his career. Throughout the eighties, Tucker supplemented his love for flying as a crop duster, flying Stearmans and Bell Model 47 helicopters. In 1988, after a string of successes in regional and state contests, Tucker won the U.S. National Advanced Aerobatic Championship.

In 1991, Tucker received his first sponsorship from Randolph Sunglasses to fly at airshows across the country, and in 1992 he won the Art Scholl and Bill Barber awards. Throughout the nineties, while flying in his black, one-of-a-kind Challenger II biplane, Tucker’s stature grew as the writing on his aircraft changed. In 1994 his sponsor changed to 1-800-Collect, and in 1997 it changed again to 10-10-220. Tucker currently flies for Oracle Corporation and runs his own school for aerobatic flight. He has flown over 700 performances at over 300 airshows throughout North America and Japan, and is a three-time winner of the Championship Airshow Pilot’s Association Challenge, the World Aerobatic Federation Championship, and the International Council of Airshows Sword of Excellence awards.

In addition, Tucker routinely serves on airshow industry oversight committees and is an FAA Airshow Certification Evaluator. With over 18,000 hours in thirty different aircraft types, Tucker continues to amaze millions of spectators annually by pulling between +11 and -7.5 Gs while performing signature maneuvers never accomplished by any other pilot. He and his wife Colleen, live in Salinas, California.

On a typical Saturday afternoon, Sean D. Tucker amazes 200,000 people as he sets up for his signature "Centrifuge" maneuver, a grueling series of eight to ten end-over-end tumbles in his black, one-of-a-kind Challenger II biplane. Tucker, who routinely pulls between +11 and -7.5 Gs during his performances, is truly "the Ambassador of Aerobatics" and the first person ever to win the two most prestigious airshow industry awards in the same year, the Art Scholl Memorial Showmanship Award and Bill Barber Award for Airshow Showmanship.