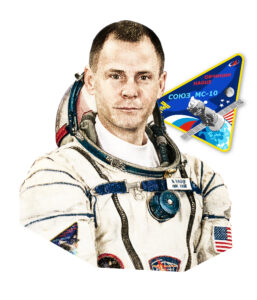 Col Nick Hague is a 1998 graduate of the United States Air Force Academy and earned a Master of Science in Aeronautical and Astronautical Engineering from the Massachusetts Institute of Technology in 2000. After graduating MIT he was assigned to Kirtland Air Force Base, Albuquerque, New Mexico, where he worked on advanced spacecraft technologies. In 2003, he attended the flight test engineering course at the United States Air Force Test Pilot School, Edwards Air Force Base, California. Following graduation in 2004, he worked at the 416th Flight Test Squadron, testing F-16, F-15 and T-38 aircraft. In late 2004, he deployed for five months to Iraq in support of Operation Iraqi Freedom, conducting experimental airborne reconnaissance. In 2006, Hague joined the Department of Astronautics faculty at the United States Air Force Academy, Colorado, where he instructed courses in introductory astronautics, linear control system analysis and design and scuba. In 2009, Hague was selected for the Air Force Fellows program in Washington, D.C., where he was assigned as a member of the personal staff in the U.S. Senate, advising on matters of national defense and foreign policy. Following his fellowship, he served in the Pentagon as a congressional appropriations liaison for United States Central Command. In 2012, Hague was assigned to the Joint Improvised Explosive Device Defeat Organization, Crystal City, Virginia, as the Deputy Division Chief for research and development, where he worked until he commenced astronaut training in 2013.  Following training he was selected for a mission to the International Space Station (ISS).  During the mission there was a malfunction with the rocket booster shortly after launch.  He is the only American to ever abort a rocket launch mid-flight and only the third time this has happened in history.  Subsequently, he has completed two missions to the ISS and won the 2019 Jabara Award for Airmanship. Hauge is married to Col. Catie Hague, U.S. Air Force. They are the proud parents of two sons. Hague enjoys exercise, flying, snow skiing, and scuba.