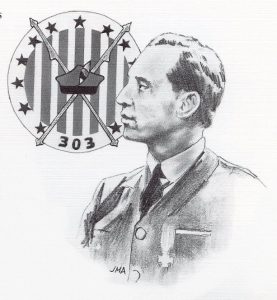 Witold A. Urbanowicz, Poland’s leading ace in World War II, flew combat with the Polish Air Force, the Royal Air Force, and the US Army Air Corps in China. Born in 1908, he grew up under Russian occupation in eastern Poland. He was commissioned in the air force in 1930 and saw his first combat in 1936 when he destroyed a Russian reconnaissance aircraft over free Poland. After Germany invaded his homeland in September 1939, Urbanowicz flew PZL-11 fighters against the Luftwaffe.

Before his country fell to the Germans, he led 50 cadets overland to England where they continued their fight for freedom. He flew Hawker Hurricanes with the Royal Air Force and ultimately commanded the all-Polish No. 303 “Kosciuszko” Squadron, and the No. 1 Polish Fighter Wing. During the Battle of Britain, his unit led all RAF Squadrons with 126 victories–Urbanowicz’s personal record was 17. In December 1942, he was assigned as Assistant Polish Air Attaché in Washington, D.C., where he met General Claire Chennault, Commander of the Fourteenth Air Force.

After considerable effort, he persuaded General Chennault to accept the services of his “one man air force” to fly combat with the Americans in China. Flying Curtiss P-40s for 5 months, he downed three Japanese aircraft and destroyed eight more planes on the ground. In mid-1944, Urbanowicz returned to England and flew Spitfires and P-51 Mustangs in support of Allied forces advancing against Germany. Colonel Urbanowicz’s many decorations include the Virtuti Militari–Poland’s highest order for gallantry.

During the Battle of Britain, Witold Urbanowicz's Hurricane carried the inscription, "We do not beg for freedom, we fight for it." This spirit was aptly demonstrated on 30 September 1940 when he led his all-Polish squadron against some 30 German bombers over southern England. After breaking up the enemy formation, he began to stalk a bomber he had previously damaged. But, before he could train his guns on the bomber, two Me-109 fighter escorts diverted his attention. He immediately engaged the enemy fighters and soon downed both of them. Urbanowicz then continued his attack on the bomber to finish his day with three victories.