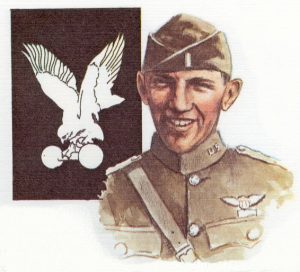 George A. Vaughn, Jr. is the highest scoring American ace from World War I. Born in 1897, he grew up in Brooklyn, NY and enrolled in Princeton University in 1915. In February 1917, Vaughn signed up for the Princeton Aviation School. Concerned about passing the physical exam, he nevertheless paid $8.50 for a uniform. He was selected and soon began to fly the Curtis “Jenny.” In June 1917, his aviation class enlisted in the Aviation Section of the Signal Corps.

Upon graduation from the Army School of Military Aeronautics at Princeton, Vaughn and most of his classmates requested duty in Italy. Sailing for Italy in September 1917, the liner stopped in England and the “Yanks ” quickly learned they were to remain there. After more ground training at Oxford University and further primary training, Private First Class Vaughn went to advanced training. He flew a variety of aircraft and in March was commissioned a First Lieutenant. By late April 1918, with 12 hours in the S.E.5a, he was combat ready. Vaughn was soon posted to the Royal Air Force’s 84 Squadron in France. On 16 June, he first tasted combat when a Pfalz slipped up and put some holes in his S.E.5a. He then chased it far behind enemy lines and shot it down.

Eight days later, he added another victory, a yellow-tailed Fokker biplane, and before the end of July he shared in two more victories. After taking leave in London, Vaughn returned to France and on 22 August shared credit for a Rumpler. On 26 August, the 17th Aero Squadron of the US Air Service lost six Sopwith Camels. Three days later, Vaughn arrived at the American squadron to command “B” Flight and fly the highly maneuverable, fast-climbing Camel. In September, Vaughn unofficially received the British Distinguished Flying Cross (DFC). While in the 17th Aero Squadron, Vaughn scored 6 victories, bringing his total to 13 by the Armistice.

Vaughn returned to New York in early 1919 and in November received his DFC, presented aboard HMS Renown in New York Harbor by England’s Prince of Wales. Returning to Princeton, he finished his engineering degree in 1920. In addition to serving as Commander of the New York National Guard Air Squadron for nearly 10 years, Vaughn established several businesses. These included the Eastern Aeronautical Corporation, the Casey Jones School of Aeronautics, and the Academy of Aeronautics. These schools trained over 30,000 aviation mechanics for the military during World War II. Vaughn retired from the National Guard in 1940 as a Lieutenant Colonel, but as a special honor in 1986 New York Governor Mario Cuomo promoted him to Brigadier General.

The painting shows Lieutenant Vaughn leading "B" flight in a Sopwith "Camel" F6034 'N' against Lieutenant Friedrich Noltenius' Fokker D VII on the morning of 22 September 1918 near Rumily, France. Both aircraft were badly shot up in a fierce dogfight, and each adversary thought he had shot the other down; both actually made safe returns. The Fokker's upper wing was damaged, but Lieutenant Vaughn's "Camel" had to be scrapped. A replica of that "Camel" on display at the Air Force Museum is outfitted with the original Aldis gunsight donated by Lieutenant Vaughn.

George Vaughn won his first eight victories in the SE-5A, an airplane that was fast, extremely strong, and easy to fly. The painting shows Vaughn about to score his first victory after a bright yellow Pfalz D III took a shot at him. He was shocked and outraged. Breaking formation, Vaughn made a climbing turn to the right pursuing the Pfalz, and closed the range as the enemy pilot headed east into Germany. His adversary dove as the range continued to close. Vaughn opened fire at 100 yards and expended 200 rounds of ammunition from his Vickers gun. The Pfalz began smoking, fell some 500 feet, and burst into flames.

Lieutenant Colonel Vaughn gained his first seven victories in the SE-5A and was reluctant to change to the Sopwith "Camel when he transferred to the 17th Aero Squadron. However, after a little experience, he found the Camel to be an "exceptionally satisfactory craft." Some of Vaughn's combat action in the Camel is graphically described in the citation accompanying his award of the Distinguished Service Cross: "Lieutenant Vaughn, while leading an offensive flight patrol, sighted eighteen enemy Fokkers about to attack a group of five Allied planes flying at low level. Although outnumbered nearly five to one, he attacked the enemy group, personally shooting down two more. His courage and daring enabled the group of five Allied planes to escape. Again, on 28 September 1918, he alone attacked an enemy advance plane which was supported by seven Fokkers, and shot the advance plane down in flames."

Lord Sholto Douglas, Vaughn's commander in 84 Squadron, gives this description of the American ace and one of his actions: "The most successful of all the Americans . under my command. A thoroughly pleasant man in every way . a very good shot in the 'Dead-Eye Dick' fashion. In one scrap . Vaughn pulled up his S.E.5 underneath a Hun . hanging on his propeller and on the point of stalling . shot down the enemy aircraft. He was quite upset . to go to the Camels..."