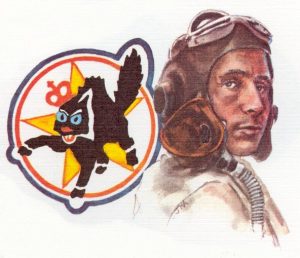 Flying only 57 combat missions in 7 months, John Voll became the highest scoring ace in the Fifteenth Air Force during World War II. After completing pilot training and commissioning in January 1944, he was assigned to the 31st Fighter Group (FG). This group was one of four initial American combat units sent to England in 1942. The 31 FG was later reassigned to protect the North African “Torch” invasion and continued to operate in the Mediterranean Theater for the rest of the war. As Lieutenant Voll arrived in Italy in the spring of 1944, the veteran pilots of the 31 FG were skeptically transitioning from their beloved British Spitfires to the North American P-51B. Voll, a 21-year-old rookie, would combine his skills with the capabilities of the P-51 to convince the veterans that the new Mustang was a superior fighter.

He scored his fifth victory in July 1944, and left the theater just 4 months later with 21 confirmed kills, 3 probables, and 4 damaged enemy aircraft to his credit. Flying a P-51D named “American Beauty,” his final victories occurred during a spectacular, individual effort. While leading an escort mission to Munich on 16 November 1944, Captain Voll experienced electrical problems and left the formation. As he returned alone, he spotted a single Ju-88 over Udine, Italy. Chasing the German aircraft as it attempted to return to its base, Voll was suddenly jumped by 12 Me-109s and FW-190s. He quickly dispatched the Ju-88 and turned into the enemy fighters.

In a swirling, 5-minute battle, John Voll destroyed two FW-190s, one Me-109, had two probables, and two damaged–an impressive feat of courage and stamina. When his commander learned of Captain Voll’s exploits, he decided that time was against Voll and made it his last combat mission. He was next sent to China as a headquarters staff officer in the Chinese-American Composite Wing. When the war ended, he was discharged from the military, but was recalled to active duty in October 1948. Voll continued his military service primarily in the Tactical Air Command, and in 1968 he was the Chief of Tactical Plans for the Seventh Air Force in Vietnam. Colonel Voll was Base Commander of McClellan AFB, California, when he retired in 1974.

While escorting B-24s on a bombing mission against the Ploesti oil refineries on 17 August 1944, a squadron mate of Lieutenant Voll was forced to bail out near the Danube River. After covering his friend until he safely reached the ground, Voll pulled away from the crash site and spotted three Me-109s. The Fierce air battle that ensued became "sweet revenge" for Lieutenant Voll. With a tally of two enemy fighters destroyed and one probable, he more than evened the score for his downed friend. These two victories, his last in the P-51B, brought Voll's total to eight confirmed enemy kills.