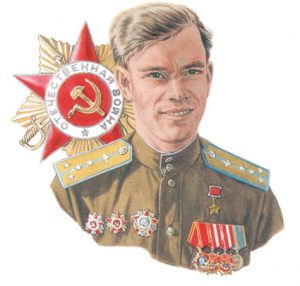 Aleksandr I. Vybornov scored 28 aerial victories during the Great Patriotic War. Born in 1921, in the town of Kashira, near Moscow, Vybornov enlisted in the Soviet Air Force in 1939. He earned pilot wings at Chuguyev military flying school one year later. In September 1942, he was posted to the 728th Fighter Regiment on the Kalinin Front, and flew the obsolete Polikarpov I-16 Rata. After 30 combat sorties and one confirmed aerial victory, he received a medal for “Military Merit.” Vybornov often flew as wingman for Arsenij Vorozhekhin, a leading ace. The pair formed a deadly fighting team until well into 1944 when both became squadron leaders.

In March 1943, the regiment transitioned to the Yakovlev Yak-7B, deployed to the Ukraine, and became heavily engaged in the Battle of Kursk. Vybornov claimed more victories including a “Double Day ” on 14 July 1943, when he downed two more German aircraft. Also in August 1943, he landed behind German lines to pick up a fellow pilot who had been downed. Loading his comrade into the single-seat fighter, the two returned safely to base. Vybornov’s 10th victory came on 11 September against a dive-bomber and earned him the “Order of the Red Banner.” In October 1943, he transitioned to the Yak-9 and fought in the battles along the Dnepr river. He was later shot down, but returned to his unit a short time later. As the winter began, he became a squadron commander and had an unofficial tally of 21 aerial victories.

While the Germans retreated into central Europe, Vybornov gained six more victories. He flew the last of 365 combat sorties near Prague in 1945. In all, he personally claimed 28 victories. These included 15 fighters, 12 dive-bombers, and one unidentified Luftwaffe aircraft. When the war in Europe ended, Vybornov was a deputy regiment commander. In June 1945, he was awarded the Gold Star and named “Hero of the Soviet Union.” He soon moved with his unit to Kacha airfield on the Crimea. In 1947, he attended the Air Force Academy at Monino. By 1953, he was a fighter regiment commander in Poland, and later, in 1958 took charge of a fighter division.

He was placed in charge of training for all air defense pilots in 1965, and two years later, was identified to command a possible Soviet Air Force deployment in support of Arab air forces in the Middle East. In Egypt to study the feasibility of the plan, Vybornov flew 12 operational sorties in three months. These sorties were so sensitive that the Soviet Ministry of Defense approved each sortie. He twice flew reconnaissance missions over Israel in a Mikoyan-Gurevich MiG-25 “Foxbat ” and was again decorated with the “Order of the Red Banner.” General Lieutenant Vybornov retired in 1980 and now lives with his wife in Moscow.