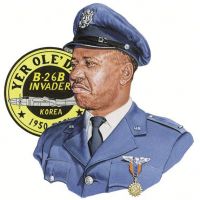 James C. “Jim” Warren was a member of the world famous “Tuskegee Airmen” and served in WWII, Korea, and Vietnam, flying 173 combat missions. Born in Gurley, Alabama, Jim enlisted in an aviation cadet program on November 19th, 1942 and entered the Army Air Force in March 1943. After arriving at Tuskegee Army Air Base, Alabama, he entered pre-flight cadet training on June 19th, 1943. Jim went on to become dual rated as a navigator and bombardier, graduating from the Hondo Army Air Force’s Navigation School on August 24th, 1944 and Midland Army Air Force’s Bombardier School on February 4th, 1945. He was assigned to the 477th Bombardment Group (Medium) shortly after it was reactivated at Godman Field, Kentucky, where they prepared for combat operations in the European Theater. With the exception of the commanders, all personnel in the group were black and endured discrimination.

On April 5th, 1945 the group was transferred to Freeman Field, Indiana, which had segregated clubs. The black officers in the group decided to protest segregation and discrimination, devising a plan (known today as “The Mutiny at Freeman Field”) to enter the all-white club that evening upon their arrival at Freeman Field. Of the sixty-one black officers who entered the club, Jim was part of the first group of nineteen and was subsequently arrested. A week later he was released from arrest.

Due to the conclusion of WWII just four months later, the 477th unfortunately never saw combat. Jim was released from active duty in March of 1946 but was recalled to active duty in March 1952 for the Korean War. He went on to conduct fifty combat missions in Korea and 123 in Vietnam. In December 1964, Jim provided airlift for Bob Hope’s Southeast Asia Christmas Show. Additionally, he recovered the “Apollo 14” team, flying the Apollo crew from splashdown near Pago Pago, American Samoa to the Manned Space Center at Houston, Texas in 1971. His flying career of over 12,000 hours was highlighted by being selected as the navigator of “Homecoming One”— the first C-141 to fly into Hanoi, North Vietnam and return the first group of American POWs to Clark Air Force Base, Philippines. The C-141 is now on demonstration at the Air Force Museum, along with his flight suit, jacket, and cap.

Jim retired from the Air Force on November 1st, 1978 after thirty years of service. He was awarded numerous medals for his service including the Distinguished Flying Cross with two oak leaf clusters, Air Medal with eleven oak leaf clusters, Meritorious Service Medal with two oak leaf clusters, Air Force Commendation Medal, and several other citations and awards. Jim graduated from the University of Nebraska and authored the book “The Tuskegee Airmen: Mutiny at Freeman Field.” In addition to being a member of the Jimmy Doolittle Air and Space Museum Foundation, he is a life member of the Kappa Alpha Psi fraternity and Tuskegee Airman Incorporated. He resides with his wife Xanthia, in Vacaville, California.

Lt Col Warren’s B-26 “Invader” flying high in the bright blue sky signifies his courageous perseverance and service to the nation as he rose above segregation and discrimination.