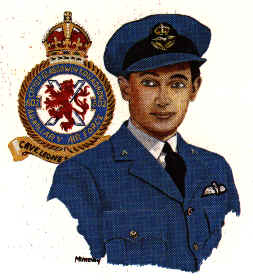 Battle of Britain Spitfire ace and Distinguished Flying Cross winner Paul Webb, a Scotsman, was born in Greenock and educated at Kevinside Academy in Glasgow. As war clouds loomed in 1937, he joined 602 Squadron. Upon graduation from flight school at Abbotsinch (now Glasgow Airport), Scotland, he received a commission in the Auxiliary Air Force in January 1938 and was called to full-time service in August 1939. Flying Officer Webb and two other Spitfire pilots were scrambled from their dispersal base at RAF Drem on 16 October 1939 to intercept 12 enemy bombers. In the ensuing action, ” Blue Section’s” Spitfires shared in downing the first enemy aircraft over Britain during World War II.

Webb remembers this as “the day I grew up.” Continuing to fend off the German attack on England, he achieved his first aerial victory on 1 July 1940, against a Junkers 88. As the Battle of Britain raged, 602 Squadron and Webb scrambled into action almost daily. By 9 September, Flight Lieutenant Webb had destroyed seven more enemy fighters and bombers before being shot down and injured, thus ending his Battle of Britain action. In early 1941, he was assigned as an instructor and flight commander in several squadrons before receiving command, on 22 November 1941, of 416 (Royal Canadian Air Force) Squadron, then forming at Peterhead, Scotland, again flying Spitfires.

He led this distinguished unit until March 1942, when he was posted to the Middle East as a P-40 Kittyhawk pilot, flying escort and attack missions for the Desert Air Force during the advance from El Alamein to Tripoli. Returning to Spitfires, Squadron Leader Webb commanded 253 Squadron in Italy, from May to September 1944, for the Balkans Air Forces, and then held a 281 Wing staff position as a wing commander when the unit was sent to Yugoslavia to support the partisan effort. Following the war, he was posted back to England as the Commander of 612 Squadron at RAF Dyce, flying Spitfires.

After completing several staff billets, Webb was accredited as Her Majesty’s Air Attaché to Turkey in 1959. In January 1963, Wing Commander Webb was invested as a Commander of the British Empire and shortly thereafter, now a Group Captain, he was given command of RAF Watton, equipped with Canberras. Subsequent assignments took him to India as Air Advisor to the United Kingdom High Commissioner, to Brussels as a member of the International Military Staff, then to the RAF staff in London. On 18 March 1973, this famous fighter pilot retired from the Royal Air Force as an Air Commodore.

At "tea time" on 9 September 1940, the pilots of 602 Squadron were scrambled over Mayfield to intercept a force of 30-40 Dornier bombers flying towards London. After destroying one Do 17, Flight Lieutenant Paul Webb's Spitfire was damaged in a fight with three Luftwaffe Messerschmitt 109 escort fighters. With no rudder control, both ailerons severely damaged, and insufficient altitude to bail out, Webb aimed the aircraft straight ahead and plowed into a grove of trees. He walked away from the crash with minor injuries, but his Spitfire was completely destroyed.