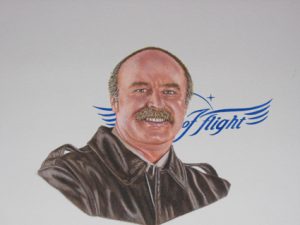 Kermit Weeks is the owner of the world’s largest private aircraft collection, totaling over 160 airframes.  Weeks was born in 1953 in Salt Lake City, Utah, but he grew up in Miami, Florida.  At the age of 13, he heard the song Snoopy and the Red Baron on the radio, sparking his interest in aviation history, aircraft, and the experience of flight.  At age 17 and still in high school, he began building his first aircraft and started flying-soloing in only six-and-a-half hours.  By the age of 20, Weeks began aerobatic flying.  In the mid-1970s, he started benefiting from royalties his grandfather earned as a geological consultant who helped an oil company find the right location to drill off the coast of Australia.

He used this new wealth to purchase a factory-new, purpose-built aerobatic airplane, a two-seater Pitts S-2A.  Weeks’ love for aerobatic flying, combined with an illness that forced him to leave college, took his life in a new direction that has strongly influenced who he is today.  Weeks honed his aerobatic skills in the Pitts S-2A, then designed, built and flew his own aerobatic aircraft-the Weeks Special, and later, the Weeks Solution.  As a member of the US aerobatic team, he flew those two aircraft in six World Championships, placing in the top three overall five times and winning 20 medals, as well as earning US National Champion honors twice.  Along with his aerobatic flying success, Weeks started his incredible aircraft collection in 1979 with the purchase of an AT-6 Texan and a P-51 Mustang.

Weeks’ collection now includes an example of every American fighter from World War II, the largest number of privately owned World War I planes, and the world’s only flying boat in airworthy condition, a 1944 Short Sunderland.  Weeks did not want to keep his love of aviation to himself, so he opened the nonprofit Weeks Air Museum in Miami in 1985, to showcase his collection for the public’s enjoyment.  In 1992, Hurricane Andrew severely damaged his facility and many of his aircraft, but he had already acquired land in Polk City, Florida, for a future attraction site, and he would not let this misfortunate deter his dream.

In 1995, Weeks opened Fantasy of Flight, a nonprofit attraction that highlights many of the aircraft in his collection, and uses the thrill of aviation and the fascination of flight to spark the search for inner freedom in all patrons who visit.  He plans to expand his attraction to include all forms of aviation history, including lighter-than-air vessels and seaplanes, a 1930s Pan Am Clipper base, and separate period displays for aircraft from World War I through present day.  Weeks resides with his wife, Teresa, in Polk City, Florida.

In 1992, Hurricane Andrew devastated the Miami area, including the Weeks Air Museum, damaging much of Kermit Weeks' aircraft collection.  He relocated to property he had purchased in Polk City, Florida, outside Orlando, and in 1995, he opened Fantasy of Flight.  Fantasy of Flight is an aviation-based museum and attraction that displays many of the aircraft in Kermit Weeks' personal collection-an array of planes that is the largest private aircraft collection in the world.