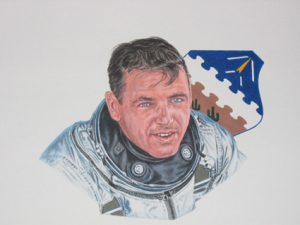 Robert M. White was the world’s first pilot to fly a winged aircraft into space.  Pursuing a typical boyhood interest in aviation, White enlisted in the Army in 1942, at the age of 18, intent on becoming a pilot.  Following advanced flying training, the Army Air Forces sent him to fly P-51s on bomber escort and interdiction missions against the Third Reich.  On 23 February 1945, on his 52nd mission, German antiaircraft artillery found its mark; White was shot down and became a prisoner of war.  While being transported to Stalag Luft 3 in Nuremberg, White saw the devastating effects of  P-51 strikes up close, as twice the train on which he was traveling came under attack.  As the Allied advance pressed forward, the Germans transferred White and his fellow POWs to a camp in Moosburg, Germany, where they were liberated in April 1945.

After the war, White was torn between remaining on active duty and separating from the service to continue his education.  He chose the latter, and in 1951, received his bachelor’s degree in electrical engineering from New York University.  Unable to shake his interest in aviation, however, he remained in the Air Force Reserves flying C-46s until the outbreak of the Korean War.  Due to his fighter experience, the Air Force recalled White to active duty to fly    F-80s in an air defense squadron in Japan.  During this time, he gained a regular commission and decided to make the Air Force his career.  Returning stateside in 1953, he was introduced to the test community at the Air Research and Development Command in Rome, New York.

After less than a year, White applied and was selected to attend test pilot school at Edwards AFB, California.  After graduating, he was assigned to flight test operations, where he flew test missions for the F-86K, F-102, F-105, F-106, and F-107 aircraft.  In early 1958, White was chosen to be the primary Air Force pilot for the X-15.  An experimental aircraft, the X-15 was designed to test aircraft performance at speeds several times that of sound and at altitudes reaching into space.  On his seventh flight, White became the first person to exceed Mach 4.  Soon after, he would also be first to achieve speeds exceeding Mach 5 and 6.

On 17 July 1962, White and his X-15 would fall free of the B-52 launch aircraft, ignite the X-15 rocket engines, and establish a climb profile that would take the pair to an altitude of 314,750 feet.  This flight into space would earn White the designation “astronaut,” and make him the first man to accomplish such a feat with a winged aircraft.  Following his last X-15 flight in December 1962, White left the X-15 program for other Air Force duties, eventually retiring 1 February 1981 at the rank of Major General.  Because of his accomplishments, White was inducted into the National Aviation Hall of Fame.