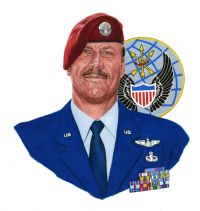 Timothy A. Wilkinson was a Pararescueman who served in Operation Just Cause in Panama, the Battle of Mogadishu in Somalia, and Operation Uphold Democracy in Haiti. Wilkinson was born in Corry, Pennsylvania in 1957. He enlisted in the United States Air Force on 6 January 1981 and was initially trained as a Missile Systems Analyst Specialist. After completing his first tour at Chanute AFB, Illinois he volunteered for cross-training into the pararescue career field, serving at Elmendorf AFB, Alaska in the 71st Aerospace Rescue Recovery Squadron and the 1730th Pararescue Squadron until November 1988. Wilkinson also served in the 1724th Special Tactics Squadron at Pope AFB, North Carolina from 1988-1996.

On 3 October 1993, US forces from Task Force Ranger in Mogadishu, Somalia were on a mission to apprehend two leaders of the Somali National Alliance. Wilkinson and the rest of the Combat Search and Rescue Team were circling above the city in a Black Hawk helicopter when they were notified that Super Six-One, a Black Hawk providing cover for troops on the ground, had gone down after being hit by a rocket propelled grenade. Within eight minutes of the crash, Wilkinson conducted a fast rope insertion into the crash site and came under heavy enemy fire from three directions. In the initial rescue effort, he repeatedly exposed himself to intense small arms fire and grenades to clear debris, provide emergency medical treatment to the survivors, and extract dead and wounded members of the crew from the wreckage. Wilkinson broke cover on three separate occasions to locate and provide emergency medical treatment to three Ranger casualties in a different location. In doing so, he disregarded personal safety to cross a 45 meter-wide open area blanketed with intense fire from small arms, and rocket propelled grenades. Although Wilkinson was wounded in the face and arm by shrapnel, he continued to treat soldiers. Wilkinson’s medical skills and uncommon valor saved the lives of multiple gravely wounded American soldiers in the longest sustained fire fight involving United States combat force in over 20 years. Wilkinson was awarded the Air Force Cross and Purple Heart for his actions. In 1996, Wilkinson was stationed with the 720th Special Tactics Group at Hurlburt Field, Florida until he retired in September in 2001. Master Sergeant Wilkinson currently resides near Fort Bragg, North Carolina where he is the Joint Special Operations Command Personnel Recovery Branch Chief.

Master Sergeant Timothy A. Wilkinson was awarded the Air Force Cross for his pararescue actions during the Battle of Mogadishu, commonly known as Black Hawk Down. In response to a US helicopter shot down by a rocket propelled grenade, he conducted a fast rope insertion into the crash site. He repeatedly exposed himself to heavy enemy fire in order to provide emergency medical treatment to survivors and extract crew members from the wreckage. His medical skills and valor saved the lives of gravely wounded Army Rangers in the longest sustained fire fight involving US combat force in over 20 years.