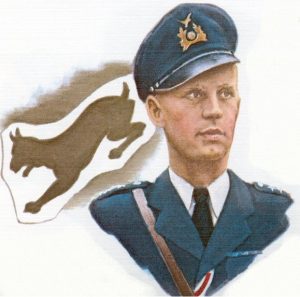 Finlands “Hasse” Wind joined other pilots from his small but gallant country in forging an unforgettable chapter in aviation history. During the Continuation War–one of two conflicts with Russia between 1939 and 1944–he achieved 75 victories to officially become his nations top ranking ace. At age 21, he completed pilot training and was assigned to fly the Brewster Buffalo with No. 24 Flying Squadron when the Continuation War broke out in the summer of 1941. Lieutenant Wind first scored in September with a shared victory, and by July of 1942 he had 5.5 aircraft to his credit. In mid-August 1942, Wind led a flight of six Brewsters into combat against 60 Russian aircraft in the biggest air battle thus far.

In this fierce encounter the Russians lost 13 fighters and two bombers, while only one Brewster was shot down. Of the 15 enemy aircraft destroyed, Wind accounted for three, boosting his score to 14.5. He continued his string of successes, and by September of 1943, the halfway point of the war, he had shot down 38 aircraft. Furthermore, Winds accomplishments in the defenses of the homeland earned him the Mannerheim Cross–his nations highest award for valor. Six months later he took command of his squadron and transitioned into the Messerschmitt 109G. By June he had reached the 50-victory mark, 11 while flying the Me-109. Wind’s most concentrated combat came during the massive Soviet offensive of June 1944, during which he scored 25 victories in just 10 days.

On 28 June he led 11 Messerschmitts against 40 Soviet bombers and their 40 fighter escorts; the Russians soon lost 11 aircraft to the Finnish airmen. Only one Finnish Messerschmitt was damaged! Wind shot down five aircraft that day, but was seriously wounded on his fifth mission. With his final tally at 75 victories, he would spend the rest of the war in a hospital. Captain Wind received a second Mannerheim Cross for his gallantry–becoming the only Finnish Air Force officer so decorated. Retired in October 1945, he frequently lectures to Finnish fighter pilot groups.

The magnitude of World War II often overshadows the fighting that occurred between Finland and the Soviet Union during the Winter War of 1939-1940 and the Continuation War of 1941-1944. During these conflicts, Finnish pilots destroyed 1,808 Russian aircraft in aerial combat and achieved an overall 7.5:1 kill ratio, while never operating more than 150 fighters at one time. As members of the worlds second oldest air force, Captain Wind and his fellow pilots of No. 24 Flying Squadron achieved 447 aerial victories in the Brewster Buffalo while losing only 19 of their own. The Brewster Buffalo was originally produced for the US Navy in 1937. World War II found an updated F2A Buffalo in service with both the US Navy and Marines in the Pacific, where it became known as the "Flying Coffin" due to its limited armament and maneuverability. The Finnish fighter pilots; however, cherished this small fighter, calling it "Taivaan Helmi" (Pearl of the Sky).