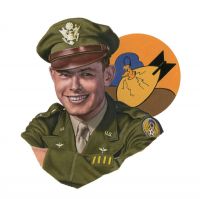 Robert H. “Bob” Wolff was a combat aviator and POW in World War II. Following the surprise attacks on Pearl Harbor, Bob enlisted as a private in the Army Air Corps. In April of 1942 he was called to active duty and began his training as an aviation cadet, flying the PT-17, BT-13, and the AT-17. On 4 January 1943, upon completion of his training, he was commissioned as a second lieutenant and assigned to the B-17 Flying Fortress. Following three months of training in the B-17, Bob and his crew, “The Wolff Pack,” were sent to join the recently-formed 100th Bomb Group, 418th Squadron in Norfolk, England. The 100th Bomb Group was officially activated on 14 November 1942 and remained on operational status through 20 April 1945 despite heavy combat losses. Although it didn’t take the highest losses among Eighth Air Force bomb groups, the heavy toll endured on eight difficult missions over Germany earned the group the nickname, the “Bloody Hundredth.” On 17 August 1943 the group participated in an epic air battle over Regensburg, Germany for which it earned a Presidential Unit Citation. While en route to their target, the bomber group came under attack by enemy fighters. The formation, led by then-colonel Curtis LeMay, lost nine aircraft, and Wolff’s B-17 took enemy fire. Although badly damaged, Wolff’s aircraft and the remaining B-17s successfully completed the attack. Five missions later, on 16 September 1943, the “Wolff Pack” met a different fate. Their target, near La Rochelle, France, was obscured by clouds, forcing the group to attack their secondary target. As they made their turn they were attacked by fighters and flak. Wolff’s B-17 was critically damaged, losing three of its four engines and ditching in the water. Captured by a German patrol boat, Wolff became a prisoner of war and was sent to Stalag Luft III POW camp. Life in the camp centered on collection, distribution and preparation of limited amounts of food. The prisoners were counted at least twice daily, and few dared escape attempts through the barbed wire fence that was guarded on each corner by guards with machine guns. A hidden radio was an important source of morale for the prisoners, as they heard BBC broadcasts that indicated that the war was nearing an end. On 28 January 1945, the Germans were forced to move the prisoners as the Russians approached. For eight days the prisoners marched through the frigid weather, eventually ending up at a rail yard in Spremberg. They remained and endured harsh conditions for three more months until an allied tank knocked down the gate and freed them on 29 April 1945. Bob eventually made his way back to his fiancée, Barbara, in California. For his actions, Bob received the Distinguished Flying Cross and the Air Medal. He and Barbara will celebrate their 70th wedding anniversary in July 2015, and currently reside in Oxnard, CA.

Lt "Bob" Wolff leads his crew, "The Wolff Pack," in their B-17 (tail # 230061) on a bombing mission over Regensburg on 17 August 1943. Heavily opposed by enemy fighters and flak, the "Bloody Hundredth" would receive a Presidential Unit Citation for this attack.