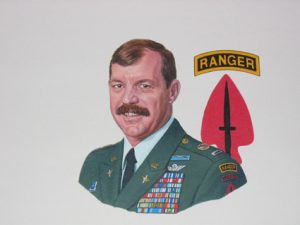 Stan Wood is a remarkable aviator who leaves an indelible mark upon every operation or organization he touches.  Character, camaraderie, loyalty, dedication, and sacrifice define only a portion of this American warrior.  Born in Lock Haven, Pennsylvania on 22 June 1960, Wood was raised by his parents, Samuel and Sue, in the town of Winfield. Fate would lead him to the US Army in the summer of 1978, after his chosen college was closed on the day he visited.  Impressed by readings from The Northwest Passage and Those Devils in Baggy Pants, Wood enlisted as an Army Airborne Ranger.  His lessons as a Ranger would come to serve his comrades well.

During a tour with 2d Battalion, 75th Ranger Regiment at Fort Lewis, Washington, Wood learned about duty, honor, loyalty, teamwork, and, above all, selflessness.  As a Ranger Wood learned, and still lives by, the Ranger Creed.  He developed a personal philosophy that teammates are the most important asset.  “Rangers Lead the Way” became a lifelong personal value.  Wood trained with numerous pilots and he was accepted into flight training at Fort Rucker, Alabama in 1983.  After completing flight school as an honor graduate, Wood reported to the 210th Aviation Battalion at Fort Kobbe, Panama.  While fighting drug cartels in South America, he learned to prepare for the unexpected and to operate in primitive environments without support.

Following Panama, Wood was selected to join the elite 160th Special Operations Aviation Regiment (SOAR) at Fort Campbell, Kentucky.  He became increasingly involved in pioneering a new MH-60 variant, the Direct Action Penetrator, for high-threat combat missions supporting the special operations community.  While assigned to the 160th SOAR Wood routinely called upon his background and experience to salvage victory during historically momentous events.  During Operation DESERT STORM, Wood led a rescue of US forces fighting deep inside Iraq, separated from each other, and in contact with the enemy.

Without outside support, he led his unit through Saddam Hussein’s untouched low-altitude defenses, engaged with the enemy, and recovered the teams.  In 1993, Wood deployed to Somalia. He volunteered for a daring resupply mission supporting the Ranger firefight in the streets of Mogadishu on 3 October.  His aircraft was riddled with bullets and rocked by RPG fire but Wood completed the resupply and ensured the ground forces could fight through the night.  Wood has over 5,500 flight hours, of which over 1,500 are under night vision goggles and 1,100 in combat operations.  Still supporting the War on Terror, his awards include the Silver Star, the Distinguished Flying Cross, the Bronze Star, and four Air Medals.  He is an Expert Infantryman and a Master Parachutist.  He and his wife, Wendy, have three daughters-Devon, Samantha, and Bailey.

Chief Warrant Officer Five Stan Wood in 2005.  The USASOC patch represents his service to the entire special operations team during DESERT STORM, GOTHIC SERPENT, and beyond.  His pride, the Ranger Tab, serves as a reminder of his lessons of camaraderie, loyalty, honor, courage and, above all, selflessness.