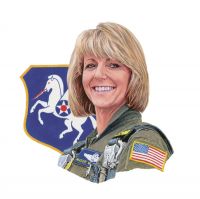 Margaret H. Woodward served as the Combined Forces Air Component Commander (CFACC), the first female to do so in Air Force history, during Operation ODYSSEY DAWN, the U.N.-sanctioned 2011 military intervention in Libya. Born in Maryland in 1960, Woodward spent the first 10 years of her life in Pakistan and India, as she followed her father’s career in the State Department. She developed a love for flying at an early age, and by the time she was five knew she wanted to fly. Woodward attended Arizona State University, and upon graduation in 1982, earned an Air Force commission through the Reserve Officer Training Corps. Earning her pilot wings in November 1983, she first instructed in the T-38, then transitioned to the KC-135 Stratotanker, where she served as an aircraft commander, instructor and evaluator. Woodward went on to serve in a variety of operational and staff positions, and in July 1998, was assigned as operations officer of the 97th Air Refueling Squadron at Fairchild AFB, Washington. Soon thereafter, the U.S. became militarily involved in Kosovo. Woodward was given a 12-hour notice to deploy and notified she would be the deployed squadron commander. As the U.S. military presence increased, she soon found herself in command of the largest tanker squadron since Vietnam. Woodward went on to command at both the group and wing level, and in March 2007, became the first woman to command the prestigious 89th Airlift Wing, home of Air Force One. Woodward was promoted to Brigadier General in September 2007, and moved to Vice Commander, 18th Air Force at Scott AFB, Illinois in January 2009. In June 2010, she pinned on her second star and took command of the 17th Air Force and US Forces in Africa, where she managed relations with the air forces of 53 African nations. In early 2011, as conditions in Libya deteriorated, Woodward and her team developed a plan for possible intervention. On 17 March 2011, the United Nations voted to impose a no-fly zone over Libya and authorized member states to take all necessary measures to protect civilians. This meant the plan was now hers to execute, which expanded to include 13 coalition members within the first 96 hours. Designated OPERATION ODYSSEY DAWN, military action began on the night of 19 March 2011. By the afternoon of 20 March, the Chairman of the Joint Chiefs of Staff announced that the no-fly zone was effectively in place – a testament to Woodward’s expertly planned and executed air campaign. The devastating effort consisted of over 2,100 sorties and 200 cruise-missile strikes, which destroyed 25 percent of Gaddafi’s military within two weeks. Woodward’s role was historic, as both the first female and the first non-fighter or bomber pilot to serve as a CFACC. She returned to the Pentagon in May 2012, and completed her distinguished career as the Air Force Director of Sexual Assault Prevention and Response. Major General Woodward retired on 1 April 2014 with over 4,000 hours of flight time, having flown and commanded in nine named operations. She currently resides in California with her husband, Dan.