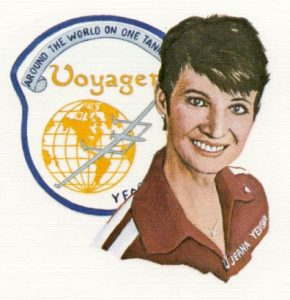 Horses, not flying, were Jeana Yeager’s first love. Born in Fort Worth, Texas, Jeana moved to Garland when she was four years old. That year, Jeana’s parents bought her the first of several horses. Jeana’s father worked for Ling-Temco-Vought, which soon moved him and his family to Oxnard, California, where they stayed until 1963. Returning to Garland, Jeana picked up a new interest–track. Competing against other girls taught her how to win and lose–attributes which helped her when she began flying. Jeana’s family moved to Commerce, Texas, when she was in the tenth grade. In 1977, she went to Santa Rosa, California, and worked as a draftsman and surveyor for a geothermal energy company. The next year she got a private pilot’s license with the intention of learning to fly helicopters.

However, before she could complete her lessons, the company she had contracted with failed. Still interested in flying, Jeana went to work for Robert Truax’s Project Private Enterprise which sought to develop a reusable spacecraft. In 1980, Jeana’s life changed when she met Dick Rutan at a Chino, California, airshow. A year later, the two of them decided to fly around the world, nonstop, unrefueled. They formed Voyager Aircraft, Incorporated, but were unable to find a commercial sponsor. Undeterred, they joined with Dick’s brother, Burt Rutan, who designed, built, and sold home-built aircraft under the trade name Long EZ. Using Burt’s aircraft, they set several aircraft speed and endurance records. In early 1982, Jeana set a new women’s speed record for the 2,000-kilometer closed course.

She broke the open-distance record of 2,427.1 statute miles in the fall of 1984 using the Vari Eze. In an attempt to set an endurance record, Jeana’s aircraft lost part of its propeller–vibration shook the Long EZ so hard that the glass broke on the instruments. She skillfully landed the damaged aircraft on an interstate highway. Obtaining funds was a problem until Jeana initiated the Voyager Impressive People program which became the major source of money to build, test, and fly the aircraft. By mid-1986, Voyager was ready for the flight. She flew as copilot on a 116-hour flight and set a world’s absolute distance record–the first time a woman had been listed in an absolute category.

In December, the pair flew for over 9 days, setting yet another record, to complete the first nonstop, unrefueled flight around the world. Jeana’s honors include the Collier Trophy (the first time ever awarded to a woman), a Presidential Citizens Medal, the Gold Medal from the Royal Aero Club of Great Britain, and many other prestigious honors. She continues to work at Voyager Aircraft and, along with Dick Rutan, makes public appearances around the country.

The Voyager is no ordinary aircraft. The airframe is made of a honeycomb composite shell, with two fuel-efficient engines mounted on the fuselage fore and aft. With a 110-foot wingspan, and a cockpit measuring 72 feet long by 2 feet wide, Voyager weighs only 1,850 pounds empty. Numerous improvements were made during flight tests; however, one aerodynamic flaw remained--speeds at 82 1/2 knots would tear the wings off. Despite the risks, Dick and Jeana departed Edwards AFB, California, early on 14 December 1986. On takeoff, Voyager's winglets were damaged and, once airborne, Dick had to shake off the damaged portions. For the first 3 days, they dodged a typhoon, overcame mechanical failure, and struggled with high fuel consumption, which threatened flight completion. Over Africa on day four, fuel problems eased, but sleep and oxygen deprivation made both pilots sick. Three days later, just north of Brazil, turbulence threw Voyager into a 90-degree bank, but Dick's quick reaction recovered the aircraft. In the final hours of the flight, the rear engine quit due to a bad fuel pump. As Voyager lost altitude, they diagnosed the problem, started to shutdown the front engine, and then successfully restarted the rear engine. Voyager landed at Edwards AFB on 23 December with 8.4 gallons of fuel to complete the first nonstop, unrefueled, around-the-world flight--a distance of 26,700 statute miles.