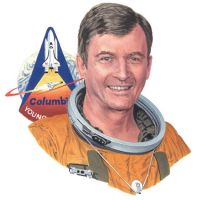 Captain John Young is a 42-year NASA veteran, astronaut, and Moon walker with six space flights spanning the Gemini, Apollo and Space Shuttle programs. Young was born in San Francisco, California in 1930 and graduated from high school in Orlando, Florida. Young received an aeronautical engineering degree with highest honors from the Georgia Institute of Technology in 1952 and entered the United States Navy. He served in the Korean War as a Fire Control Officer aboard the destroyer USS Laws until June 1953. Following his combat cruise, he completed naval flight training and was assigned to VF-103 where he flew F9F Cougars and F8U Crusaders. In 1959, he graduated from the U.S. Navy Test Pilot School and was assigned to the Naval Air Test Center. There he participated in the test and evaluation of the F-8D Crusader and F-4B Phantom II. In 1962, he set world time-to-climb records to 3,000 meter and 25,000 meter altitudes in the Phantom II. His next assignment was to VF-143, one of the first operational F-4 squadrons. In 1962, Young was selected in the second group of NASA astronauts known as “the new nine.” He flew the first manned Gemini mission with “Gus” Grissom on March 23, 1965. The Gemini program paved the way for Apollo by proving and refining capabilities necessary for lunar exploration: orbital maneuvering, rendezvous, docking, extravehicular activities and extended duration missions. In July 1966, Young commanded Gemini 10 with Michael Collins and completed a dual rendezvous with two separate Agena target vehicles. His third space flight came in May 1969, as the command module pilot on Apollo 10 with Tom Stafford and Gene Cernan. It was the second manned flight to the Moon and the last in preparation for Apollo 11’s planned lunar landing. Young returned to the Moon as the commander of Apollo 16 in April 1972. He and Charlie Duke spent 3 days exploring the Descartes highlands, driving the lunar rover nearly 17 miles and collecting 213 pounds of lunar samples. After Apollo, Young became Chief of the Space Shuttle Branch of the Astronaut Office and then Chief of the Astronaut Office in 1974. In April 1981, Young commanded STS-1, the first flight of the Space Shuttle. Columbia’s maiden voyage was the first test flight of a manned spacecraft without the benefit of a previously unmanned mission. It proved the Space Shuttle could reach orbit, return safely to Earth and be readied for another launch. He was awarded the Congressional Space Medal of Honor for this pioneering flight. In 1983, Young made his final space flight as commander of STS-9, the first Spacelab mission. Young was preparing for his seventh space flight to deploy the Hubble Space Telescope when the Challenger accident halted shuttle operations for nearly three years. In 1987, Young was appointed as Special Assistant to the Director of Johnson Space Center for Engineering, Operations, and Safety. In 1996, he was assigned as Associate Director (Technical) and provided safety oversight of all agency programs at Johnson Space Center. John Young retired from NASA on December 31, 2004 with over 34 days logged in space and more than 15,275 flight hours in numerous aircraft. He was the only astronaut to have piloted four different classes of spacecraft.

Captain Young was first selected as an Eagle by Air Command and Staff College’s Gathering of the Eagles in 2009 and subsequently honored in 2010.

Already a veteran of two Gemini space flights and a lunar orbital mission on Apollo 10, John Young commanded Apollo 16 during April 16-27, 1972. Following Apollo, he became Chief of the Astronaut Office and commanded the first Space Shuttle mission and first flight of Spacelab. He is regarded as "the astronaut's astronaut."

Already a veteran of two Gemini space flights and a lunar orbital mission on Apollo 10, John Young commanded Apollo 16 during April 16-27, 1972. Following Apollo, he became Chief of the Astronaut Office and commanded the first Space Shuttle mission and first flight of Spacelab. He is regarded as "the astronaut's astronaut."