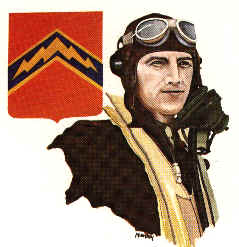 Hubert “Hub” Zemke, who would become one of World War II’s great aces and outstanding combat leaders, was born in Missoula, Montana on 14 March 1914. Majoring in forestry, he attended Montana State University on a football and boxing scholarship. Cutting his college days short to become a flying cadet, he attended basic pilot training at Randolph Field, Texas, in 1936. He graduated from the Pursuit Pilots’ course at Kelly Field, Texas in 1937. In 1940, while assigned to the American Embassy in London, he observed Royal Air Force and Luftwaffe capabilities.

A year later and while assigned to the American Embassy in Moscow, he instructed Russian pilots in the P-40 Tomahawk . Returning stateside, Zemke assumed command of the soon-to-be legendary 56th Fighter Group on 16 September 1942–the first Army Air Forces unit equipped with the new P-47 Thunderbolt. Under his tireless leadership, “Zemke’s Wolfpack” scored over 500 of the 56th’s total 674 1/2 aerial victories. Scoring 15 1/4 aerial victories with the “Wolfpack,” he added another 2 1/2 with the 479th Fighter Group, which he commanded after their leader was shot down. During his last combat mission on 30 October 1944, Zemke encountered severe, unforecasted weather and was forced to bail out of his P-51 Mustang due to structural damage.

Landing behind enemy lines, he was captured and taken to Stalag Luft I where he spent the remainder of the war as the senior Allied POW. Following the war, he was Tactics Division Chief at the Air Tactical School, Tyndall AFB, Florida. During the Berlin Airlift, Zemke commanded the 36th Fighter Group at Furstenfeldbruck AB, Germany, providing air defense alert. Remaining in Germany, he served as Chief of Staff of the 2d Air Division in Landsberg. He attended Air War College in 1953 and upon graduation was assigned as Chief of Plans within the Directorate of Operations at the Pentagon.

Next, he commanded the 31st Fighter Wing, Albany AFB, Georgia, followed by command of the 4080th Strategic Reconnaissance Wing at Laughlin AFB, Texas, equipped with the top secret U-2. After 3 years as Air Section Chief, US Military Assistance Advisory Group, Madrid, Spain, Zemke then commanded the Reno Air Defense Sector at Stead AFB, Nevada. Colonel Zemke retired in 1966 after 30 years of distinguished military service. Since then, he has pursued a second career in agriculture.

In the fall of 1943, P-47 pilots had been pushing deeper into Germany to protect B-17s and B-24s from enemy fighters. On 2 October 1943, the mission commander, Colonel "Hub" Zemke, got a "tally-ho" on a Focke Wulf FW-190 directly below and to the rear of the B-17s. He called a bounce and rolled out to within 500 yards of the lone Focke Wulf. He fired three bursts, after which the FW-190 went into an unrecoverable dive. Having upped his total aerial victories to five that day, Colonel Zemke was greeted by an "ace's welcome" upon landing at RAF Halesworth.