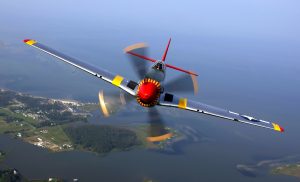 The Gathering of Eagles Foundation serves to Honor Heritage, Serve Community, and Forge Futures within the River Region surrounding Montgomery, AL. GOE is the capstone event in the Air Command and Staff College (ACSC) curriculum. The program traces its roots to 1980, when ACSC invited retired Brigadier General Paul W. Tibbets to visit Maxwell AFB, Alabama, to share his flying experiences with ACSC students.

The first official GOE program, “Great Moments in Aviation History,” began in 1982 when the ACSC Commandant energized faculty to develop an aviation heritage program for the graduating class. The faculty designed a program that encouraged the study of aviation history and emphasized the contributions of air and space pioneers. The inaugural GOE team selected 15 distinguished aviators and invited them to share their unique personal experiences through a series of teaching interviews and social events with members of the class. The first “Eagles,” as they would become known, spanned aviation history from World War I to the Space Age and included military and civilian aviators who had served in the Air Force, Navy, Marine Corps, Army, and NASA. The first GOE event included a graduation dinner emceed by comedian and military supporter Bob Hope. It was a history-making event that cemented the continuation of GOE for years to come. Since 1982, over 450 Eagles have recognized. 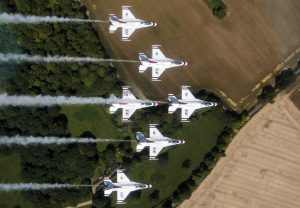 Through the years, countless ACSC students, faculty advisors and community leaders have dedicated their time and talents to the success of the GOE program. In 2007, the GOE Foundation became a private organization and established itself as a non-profit organization in 2009. Today, the GOE Foundation supports GOE by organizing a program for ACSC students, Maxwell AFB personnel, and the River Region community to learn about Airpower history from the people who lived it.