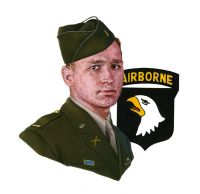 Edward Shames was a member of the renowned Easy Company, 506th Regiment, 101st Airborne Division, commonly referred to as the “Band of Brothers”. Born in Norfolk, Virginia on 13 June 1922, Shames was called to active duty in August 1942 and was involved in some of the most important battles of World War II. He parachuted into Normandy for his first combat jump on D-Day as part of Operation Overlord, served during Operation Market Garden, fought in the frozen terrain at Bastogne, and was with fellow soldiers in the bombed out shelter of Hitler’s Eagle’s Nest at the end of the war. Shames found himself at the new airborne training camp in Toccoa, Georgia by late August 1942. After completing grueling airborne training, he was promoted to Staff Sergeant and was assigned to fill the position of Operations Sergeant while stationed in England. It was here that Shames built the sand tables, a tool used for landing zone rehearsal simulation, to plan the paratrooper airdrop into Normandy on D-Day. He gained a reputation as a stubborn and very outspoken soldier who demanded the highest of standards from himself and fellow soldiers. Shames not only earned the respect of his men, but was recognized by his command for outstanding leadership and on 13 June 1944 he received a battlefield commission to Second Lieutenant. This made him the first non-commissioned officer in Third Battalion to receive a commission in Normandy. Soon after, he led the Third Platoon’s first mission objective to identify where enemy combatants were located. Shames fought with Easy Company in September 1994 during Operation Market Garden, an unsuccessful mission meant to seize bridges and provide armored ground units for the Allies’ rapid advance into Germany. He volunteered for Operation Pegasus in October 1944 during which allied forces evacuated a large group of men trapped in German occupied territory. He fought with the rest of Easy Company at Bastogne during the Battle of the Bulge in December 1944. Later, Shames and fellow soldier, Paul Rogers, took out a German tank with a bazooka in Foy, Belgium. In Germany, he helped liberate imprisoned European Jews and other outcasts from Nazi concentration camps. Those sights at the camps deeply impacted Shames because of his Jewish heritage. When Germany surrendered, Shames found himself at Hitler’s Eagle’s Nest where he managed to acquire a bottle of Martell Whiskey marked with Hitler’s initials. He opened the bottle almost twenty years later for his son Steven’s Bar Mitzvah. Shames is most proud of earning his battlefield commission and the fact he brought more men home from his platoon than any other of the 200 platoons in the 101st Airborne Division. After World War II, he served in the Army Reserve and retired as a Colonel. He currently lives in Virginia Beach, Virginia with his wife of 74 years, Ida, and is the last surviving officer of Easy Company.

Colonel Edward Shames is known for his involvement in some of the most crucial moments of the Allied Invasion during WWII. He parachuted into Normandy on D-Day and fought against the German counterattack in the Battle of the Bulge. Shames received a battlefield commission in June 1944 before liberating Nazi concentration camps and assisting in the capture of Adolf Hitler’s Eagle’s Nest. He is the last surviving officer of the renowned Easy Company, 3rd Battalion, 506th Parachute Infantry Regiment, 101st Airborne Division, better known as the Band of Brothers.